While I found it a little easier to narrow it down to my top 10 films this year over last year, there were still many gems.

What do you do when you’re a Pakistani stand-up comedian who gets heckled by an American woman at a show, you begin a relationship and shortly after, she becomes gravely ill and has to be put into a medically induced coma? You write a movie about it together of course! This is the hilarious and heartfelt true story of real life couple Emily V. Gordon and Kumail Nanjiani. This Oscar nominated script is funny, smart and vulnerable – a rarity for romcoms as of late. It handles cross-cultural themes with courage and grace, and Holly Hunter is pure delight.

2. Get Out – written/directed/produced by Jordan Peele

I can’t think of a better directorial debut than Jordan Peele’s Get Out. There wasn’t one shot or one line of dialogue that wasn’t meticulously thought out. This smart social critique is packed with humor, thrills and chills. Not only will it stick with you for days (maybe weeks), but it absolutely demands a second viewing. Get Out grossed 254.9 million at the global box office against a 4.5 million dollar budget. This means Peele’s options are wide open for what he tackles next. I’m very much looking forward to seeing what he chooses to sink his creative teeth into in the future.

Every so often a film will come along that perfectly captures the aspects of adolescence. Greta Gerwig has made the latest, and she executed it with such charm, confidence and originality. Lady Bird is the coming-of-age story of a senior at a catholic high school as she battles with her mother, her friend, a boy and herself, among others.

This film took the breath out of me. It tells the story of Moonee and her young mother Halley, who live in Magic Castle, a motel in Kissimmee, Florida close to Walt Disney World as they struggle to make ends meet. As you take it in, you’re sure to feel a wide range of emotions – adventure, enchantment and innocence mixed with heartbreak, hopelessness and sadness. It’s an extremely empathetic look at America’s forgotten.

Master filmmaker Christopher Nolan delivers his best since 2008’s The Dark Knight with this emotionally powerful war film. Shot on IMAX 65 mm and 65 mm large-format film stock, this practical effects driven and minimal dialogue story is told from three different perspectives that are sure to blow you away: land, sea and air. Cinematographer Hoyte van Hoytema and composer Hans Zimmer both bring their a-games and were recognized with well deserved Oscar nominations.

6. The Shape Of Water – written/directed/produced by Guillermo del Toro

Next to The Big Sick, this is the love story of the year. From the wildly creative mind of Guillermo del Toro comes The Shape Of Water, a fantasy film set in Baltimore in 1962 during the Cold War. This film is packed with brilliant performances from Sally Hawkins, Octavia Spencer, Richard Jenkins, Michael Shannon and Michael Stuhlbarg.

I walked into this film with joy and sorrow. Joy because Daniel Day-Lewis is one of my all time favorite actors and sorrow because back in June, his spokeswoman announced that he will be retiring after this film. Perhaps there was no better way for him to go out on a high note than by teaming up once more with one of the best living filmmakers, Paul Thomas Anderson. While Phantom Thread doesn’t quite measure up to the pair’s last film, the 2007 masterpiece There Will Be Blood, it’s close. This is thanks to an original script, impeccable direction, brilliant acting and beautiful music by Radiohead’s Jonny Greenwood. Thank you Daniel Day-Lewis for bringing us some of the best performances of the last four decades.

Steven Spielberg’s The Post was the most timely film of 2017. It’s packed with a powerful cast, masterful directing, a brilliant script and beautiful cinematography.

9. Battle Of The Sexes – directed by Jonathan Dayton and Valerie Faris

From the team who brought you Little Miss Sunshine comes Battle Of The Sexes, the true story of the 1973 tennis match between Billie Jean King and Bobby Riggs. Emma Stone and Steve Carell are perfect in this poignant dramedy about sexuality and sports. 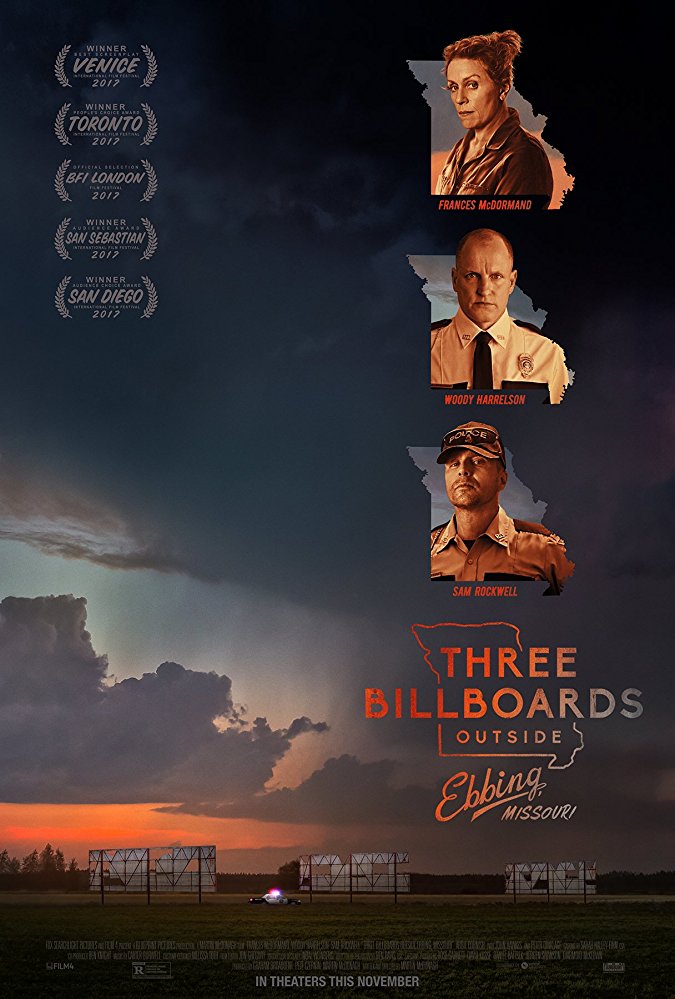 From Martin McDonagh, director of In Bruges and Seven Psychopaths and producer of The Guard, comes Three Billboard Outside Ebbing, Missouri. This film packs a powerhouse cast more than capable of carrying this black comedy/tragic drama.

Honorable mentions:
All The Money In The World
American Made
Brad’s Status
Girls Trip
I, Tonya
It
It Comes At Night
Logan Lucky
Megan Leavey
Molly’s Game
Only The Brave
Patti Cake$
Stronger
Thank You For Your Service
War For The Planet Of The Apes